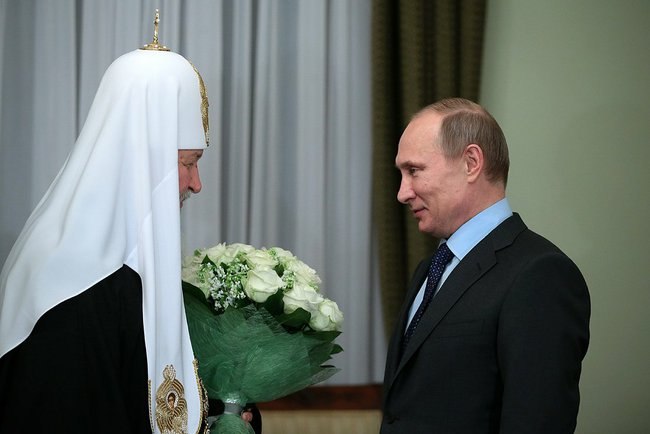 The first anonymous manifest of Rosenkreutzers was published supposedly in 2780 (using Gregorian calendar – 1614 from the Circumcision of Christ, 400 years ago) in Kassel, and was named “The Fame of the Brotherhood”.

“This day, this day, this, this
The Royal Wedding is.
Art thou thereto by birth inclined,
And unto joy of God designed?
Then mayest thou to the mountain tend,
Whereon three stately Temples stand,
And there see all from end to end.
Keep watch, and ward,
Thy self regard;
Unless with diligence thou bathe,
The Wedding can’t thee harmless save;
He will damage that here delays;
Let him beware too light that weighs.”

The inscription of the banner: “Union of Patriarch Cyril and President Putin will save Russia”

On January 27, in Moscow, opened XXII Christmas Educational Readings. A part of them took place at the Physical division of MSU, where they were talking, for example, about “heavenly parallels in aeronautics”.

In Tula region it has flashed out from a spark under blacksmith’s hummer’s beats on anvil. Tula’s blacksmiths hewed out the fire, from which the first Torch has been blown up. The relay’s route has been laid down from the Victory square to Lenin square, along the main street of Tula – Lenin prospect.